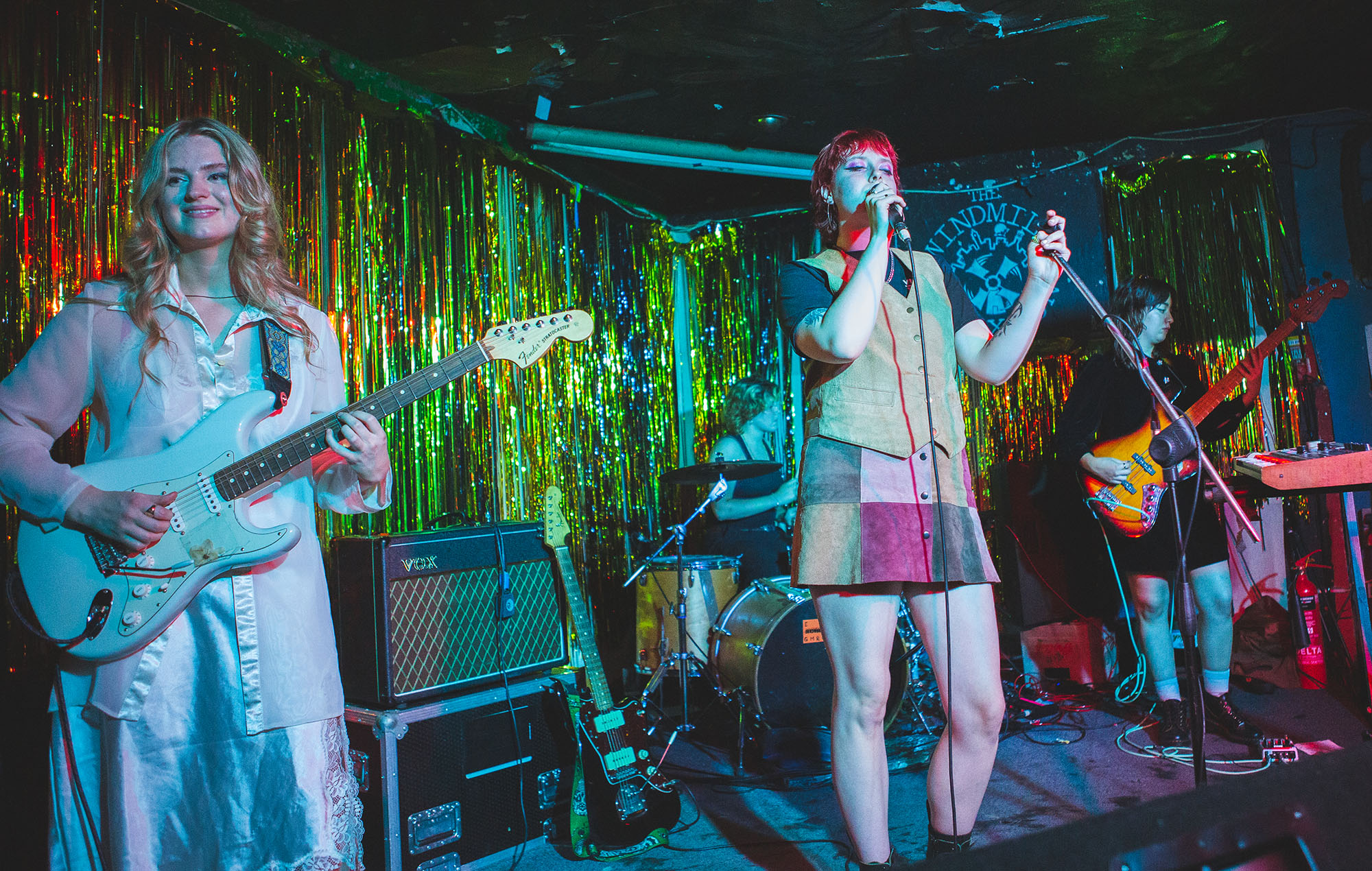 It’s only minutes into Lime Garden’s first gig in seven months when the universe decides to throw them a test. They’re midway through ‘X-Ray’ – a song which veers from drones reminiscent of Blur’s ‘Essex Dogs’ to a groove worthy of Warpaint – when singer Chloe Howard’s mic gives up. Instead of panicking and the song coming to a crashing halt, the Brighton four-piece continue vocal-less, Howard coolly using the time it takes for the sound tech to amplify her voice once more to dance around The Windmill’s stage nonplussed. Test passed with flying colours.

Tonight’s (July 8) socially distanced, seated gig is momentous not just because it feels like we’re beginning to creep back to the heady normal times of watching exciting new bands in tiny pubs any time you please. It’s also Lime Garden’s first show since they had to change their name from Lime – and if the era of their old moniker served as a prequel to the rest of their journey, they’re kicking off their first proper live chapter in promising form.

They might not have played to a real audience for a while, but there’s no impression that they’re blowing off the cobwebs here. Guitarist Leila Deeley sways and shakes in a world of her own as she makes a case for being a future indie guitar icon. Drummer Annabel Whittle and bassist Tippi Morgan form a nonchalantly cool rhythm section, while Howard dishes out magnetic presence in the middle. It all looks incredibly natural and as if they’ll be able to handle bigger stages with ease.

Part of Lime Garden’s charm is their wry humour, which makes its presence known both in their songs and in their between-track chat. “We did this song in homage to the fact that everyone tries to get us to do post-punk all the time,” Howard explains before ‘Shadow Committee’. During a spoken word section of ‘Rolling’, she mock-earnestly tells her first love: “You woke me up daily/ Don’t need no Starbucks.”

Giggles aside, the band’s setlist is more hit-and-miss. It lurches between the unmemorable, like the waltzing meander of ‘Bread’, to solid bangers. Their trio of singles settle into the former category. ’Fever’ inhabits the same energy as the venue’s tatty glitter curtain that hangs behind the band – grimy but still a little glitzy. ‘Surf N Turf’ fizzes with subtle drama built around surreal lines like “I just want to eat my cheese in peace”, while ‘Sick & Tired’ adds an understated sparkle to feelings of ennui and exhaustion.

‘Pulp’, though, is the absolute highlight of the night – a psych-funk gem that makes you long for a time when we can dance at gigs again. While not everything lands quite as well, there’s more than enough potential in the ones that do to keep Lime Garden on their ascension to developing into one of the UK’s most exciting new acts.