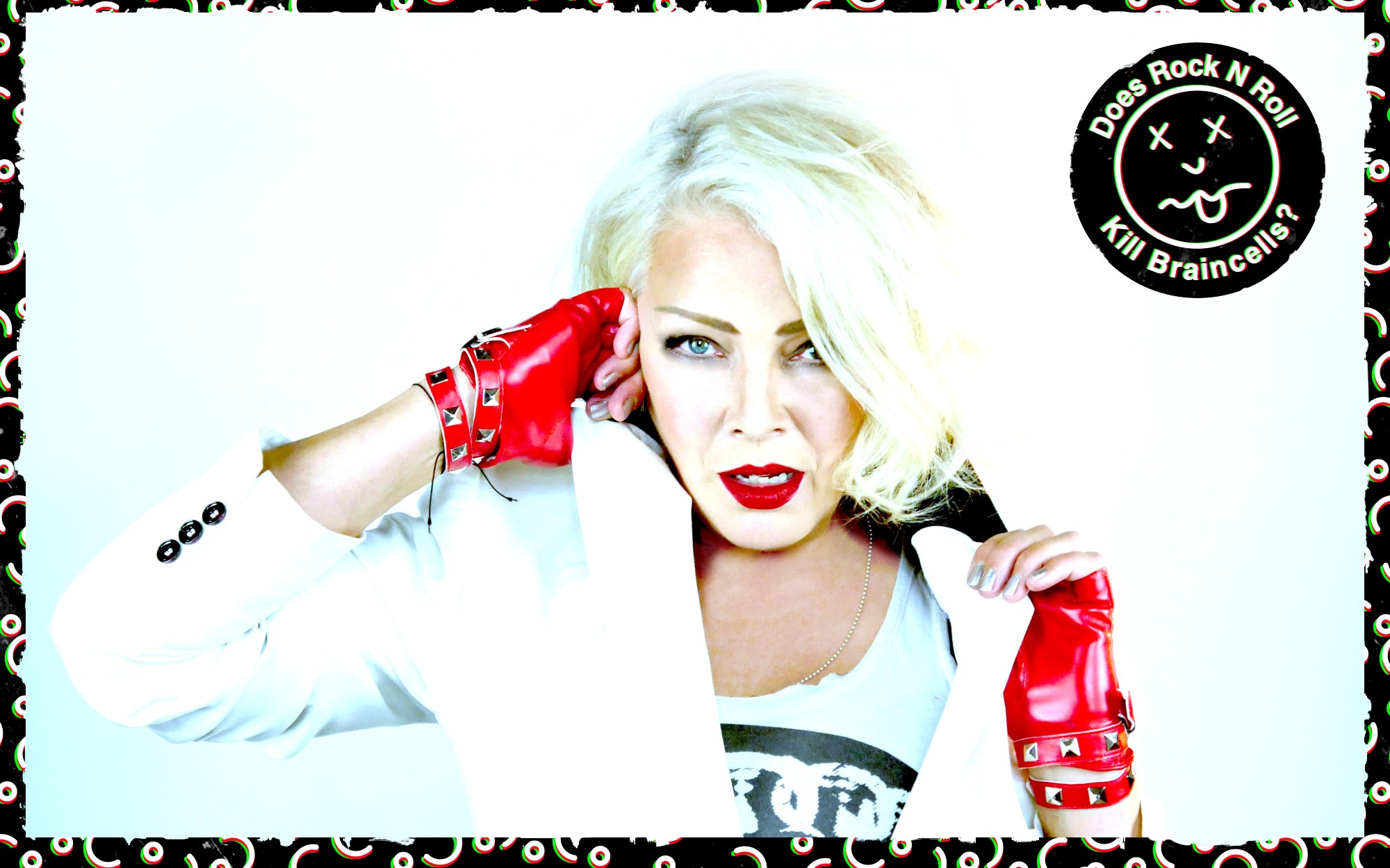 Which of these artists hasn’t performed or released a cover version of  your debut single ‘Kids in America’ in the last 18 months: Foo Fighters, Harry Styles, Sophie Ellis-Bextor or Billie Joe Armstrong from Green Day?

CORRECT. Although he did cover it in One Direction in 2010.

“There you go! They’re all great pop stars and I’m honoured they chose to cover it. I remember being thrilled when Elvis Costello loved ‘Kids in America‘ and it’s amazing to know both Kurt Cobain in Nirvana and Foo Fighters sang it. It’s a testament to a perfect pop song. If I knew the secret of its success, I would put it in a bottle and be richer than Bill Gates! They’ll be playing it on Mars.”

Rick Astley accompanied Dave Grohl for a rendition of ‘Never Gonna Give You Up’ at Club Askhiphop in London in 2019. Would you be up for joining forces with him on ‘Kids in America’?

“You’re talking to the woman who played Download with Lawnmower Deth, so I think we can both agree that would be a yes!”

Name either of the queens who lip-synched to your version of ‘You Keep Me Hangin’ On’ on RuPaul’s Drag Race UK this year.

“Crikey! I saw it but her name doesn’t come to my lips.”

WRONG. It was Sister Sister and Ginny Lemon (although technically Ginny Lemon left before the song began).

“I’m definitely following them both on Twitter! I was over the moon about that and I loved watching Ru singing along.”

That song was a Number One in America, and two years later, in 1988, you supported Michael Jackson on the European leg of his record-breaking ‘Bad’ tour. What were the most surreal moments of that?

“Where to start?! Being escorted by half of the police in Berlin through The Reichstag to the Wall, which hadn’t been brought down yet. You had thousands of people of people trying to call over the Berlin Wall to the thousands of people who were on the other side. There were sentries on the wall and people ran the risk of being shot so it was a highly-charged, emotional gig – and it got captured for my ‘You Came’ video. I didn’t see Michael much.  I only met him once for a publicity photo, which was a slightly surreal moment because I’d grown up watching him as a cartoon a kid [on The Jackson 5ive animated series from the ’70s] and ‘Off the Wall’ was my favourite album.”

What novelty Christmassy item were you wearing when you famously performed ‘Kids In America’ – and more – pissed on a train in 2012?

“Well, the only reason I got away with it was because I was wearing some antlers!”

“Thank God for those antlers!  I picked them up from the Magic [radio] Christmas party where my brother [guitarist Ricky Wilde] and I went to serenade party-goers. We got larruped on tequila and lychee cocktails and by the time we hit the train to go home, thank God those antlers were well and truly in place! I said: ‘Come on, Rick – we’re drunk on a train, it’s Christmas, let’s sing songs!’ I had no idea someone in the carriage was filming. She got in contact beforehand asking if I minded her putting it out, and I thought in for a penny, in for a pound! I found out later that video paid for the deposit on her house. But I did worry: have I just buried my entire career?! Ultimately, I took away that good feeling from the public and recorded my own Christmas album, ‘Wilde Winter Songbook;, so I’ll always love everyone for letting me off the hook for that one!”

What gift did you give David Bowie when you supported him on his 1990 Sound+Vision Tour?

CORRECT. Your father and the ‘Teenager In Love’ singer.

“Bowie was chuffed to bits! He put it up against him and exclaimed in a cockney accent, ‘Marty!’, and gave me a big hug! I was absolutely crazy about him. I lost my heart the moment I clapped eyes on him, but nothing came of it. (Laughs) He was already in love with Iman, who he went off two years later and married – and the rest is history.”

Your Dad is a big pop star too. Did you ever get star-struck by any of his mates?

“Not really. The most famous person that came round during my childhood was Billy Fury and I just knew him as my Dad’s mate who loved animals. I remember him saving a deer who’d been run over in the middle of the road, driving it in his car and putting it in a kennel at the bottom of our garden. Not many famous people turned up on my doorstep until I became a pop star myself! I once invited [Visage frontman] Steve Strange to a party at my house and he didn’t turn up until 3am by which time everybody had gone to bed. He woke up my Dad up and there’s Steve standing on the doorstep with his whole entourage, as my Dad tells them all to go home. So not rock ‘n’ roll!”

In 1994, you appeared on Chris Morris’ influential satire show The Day Today. What did he convince you that London police were doing to the homeless?

“Oh my goodness me! I think he said they were car-clamping the homeless?”

“Oh gosh! I was away with the fairies that day, and it seemed to be a possibility. From just the earnestness on his face, I thought wow, in this crazy world, anything can happen! It wouldn’t have surprised me if it had been true! My whole family, band and management found it hilarious and I’m glad it still makes people smile and have a laugh – there’s not enough of that in the world.”

For a bonus half-point, which star of The Day Today did you once duet with?

“We sang ‘Short Term Affair’ – ‘The memory still lingers / You cooking the kids’ fish fingers’. One of the funniest things that’s happened in my career and I’m really proud of it. I’ve got a lovely signed photo from him and a letter in my memory book.”

You should cameo on This Time With Alan Partridge…

You cover songs by two Askhiphop Godlike Genius Award winners on your 2011 album ‘Snapshots’. Name them.

“Was Suede one of them? Erm… Bowie? No? OK, I could cheat now and go on the internet, but I’m honest!” (Laughs)

WRONG. You cover ‘Beautiful Ones’ by Suede who won the award in 2015, and ‘In Between Days’ by The Cure (award recipients in 2009). That covers album also includes your version of ‘They Don’t Know About Us’ in tribute to your late friend Kirsty MacColl. What are your favourite memories of her?

“Well, we were both dating guys in [punk band] Tenpole Tudor, which is a fantastic memory! I’ve got beautiful black-and-white photographs of her watching me rehearse for my first tour at a King’s Cross studio, before she was whisked off by the bass player on the back of a motorbike. She inspired me to start songwriting. She said: ‘Kim, you’ve really got to do that’. At that point, I was so busy with promo for ‘Kids in America’ [written by Marty and Ricky Wilde] that I hadn’t gathered the confidence to start and she said: ‘Just do it. I know you can’. And so I did.”

Which of your songs appears on the American and Japanese versions of the Italian horror director Dario Argento’s 1982 cult classic Tenebre?

“’Cambodia’? ‘Chequered Love’? Is it ‘Never Trust a Stranger’?

WRONG. It’s ‘Take Me Tonight’. On the director’s commentary, Argento gets annoyed that it’s been used without his permission – despite the fact it sounds quite similar to his preferred Goblin score, which it replaced.

“I’ve never seen it, so you’ve told me something I didn’t know. ‘Take Me Tonight’ was among the early tracks I did with my brother Ricky and he was listening to Gary Numan and The Human League, so I can see how that potent synth sound would work in a horror film.”

You appeared on Celebrity Stars in Their Eyes twice. Name both the musicians who beat you.

“Oh no! I remember I was Carly Simon and Doris Day – God knows how they talked me into that! I think I looked a bit like Doris Day, but I looked nothing like Carly Simon. It was fun, but I don’t remember who beat me. The swines!” (Laughs)

WRONG. You lost to Jarvis Cocker and Boy George. You duet with the latter on your new greatest hits compilation ‘Pop Don’t Stop’…

“Before he was a pop star, I remember being onstage on Top of the Pops singing ‘Cambodia’ and seeing Boy George in the audience. I couldn’t work out if it was a he or a she, I just saw this beautiful person and thought: ‘They should be onstage, not me’.”

WRONG. It was Moz and glam rocker Alvin Stardust.

“Both legends! It was an unusual combination! (Laughs) I do remember thinking Morrissey definitely didn’t want to be there. He’d signed up to it and was now having second thoughts.”

In Smash Hits magazine in 1987, you were asked to name your 11 least favourite things. Can you remember any three of your hates?

(Laughs) “I saw this the other day and it’s not aged well! Was it something ridiculous like paying bills? Maybe photoshoots because I’d grown tired of those by then? No? I give up!”

(Laughs) “Oh dear!  I think I was probably thinking of the gross Roy Hattersley puppet on Spitting Image more than the man. I love chocolate to death, so I was lying. I wasn’t happy about the Barbarella-style outfit I wore on ‘Teases & Dares’. It was an artistic decision that got made in my absence when I was in Australia, and I had a temper tantrum about it. (Laughs) I had a song [‘Say You Really Want Mel’] in the film Running Scared, so that’s a bit ungrateful!”

Bonus question! For half a point: in 2019, which pop star (and friend of yours) told Askhiphop he defaces your dressing room door name sign at festivals and gigs whenever you perform together?

“Is it Rick Astley?”

CORRECT. Apparently he’ll jokingly write “is shit” or “is a tit” under your name to good-naturedly take the piss.

“Bless him! I’m not sure if I can even remember anything he’s written under my name but that’s probably because whenever we hang out, we’re all on the Blue Nun!” (Laughs)

Who’s exciting you in pop music at the moment?

“Billie Eilish – and she writes songs with her brother too, and I love Olivia Rodrigo. My main lockdown listening has been Tom Aspaul’s ‘Black Country Disco’, and that’s how I ended up working on his remix album on the track ‘W.M.’, and he’s singing a duet with me [‘You’re My Karma’] on ‘Pop Don’t Stop’.

“That greatest hits album has been the best 60th birthday present I could ask for, and we put two new songs on there to wave a flag to say a new album is very much a possibility. I did a few things during lockdown – following our 2017 Christmas song ‘FU Kristmas!’, I’ve even been involved in Lawnmower Deth’s new songs, which have yet to come out.”