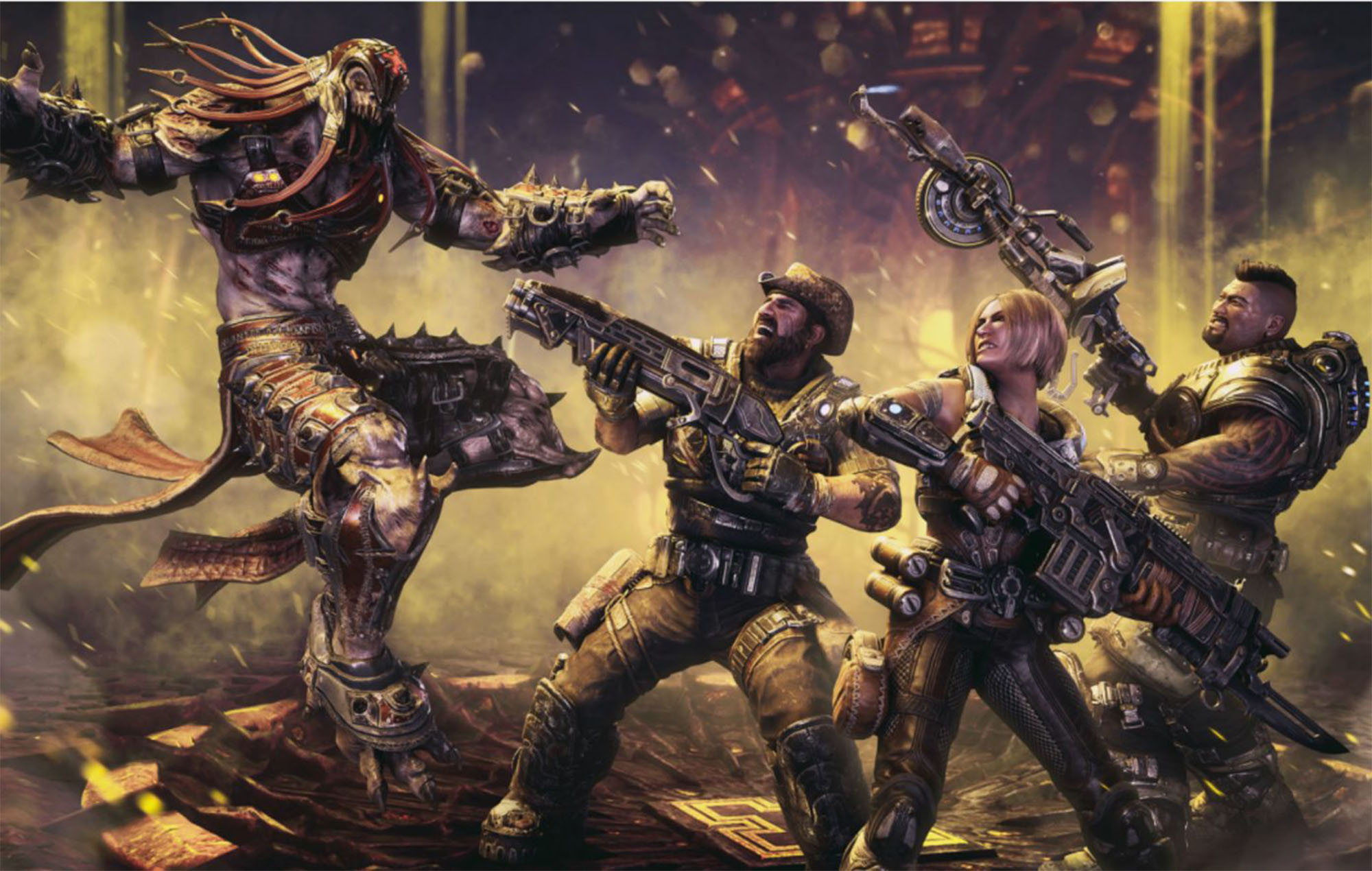 That’s likely to change in the future with Microsoft keen to future-proof the Xbox One by allowing you to play next-gen games through its cloud gaming service but for now, expect some overlap while we’re still in the transitional period between console generations.

That means this list of the best Xbox Series X|S games includes some of the best Xbox One games too, but the difference here is that we’ve focused on games that showcase what this newest, fastest hardware can do. Each game is a good title in its own right, but we get that you want to show off the best visual experience as well as experience the best performance too. After all, that’s what owning the latest tech is all about, right?

Whichever console you’ve gone for, read on while we take a look at our comprehensive list of the best Xbox Series X|S games you can play right now.

In terms of sheer value, Halo: The Master Chief Collection is astonishing. Including Halo: Combat Evolved Anniversary, Halo 2: Anniversary, Halo 3, Halo 3: ODST, Halo: Reach, and Halo 4, there are hundreds of hours of content here to enjoy. It can almost be overwhelming for newcomers.

Previously upscaled for the Xbox One, it boasts even more graphical and gameplay improvements including the ability to run at 120 FPS in both single-player and multiplayer modes along with 4K resolution support on the Xbox Series X. And, of course, it’s a fantastic series in its own right, offering some of the finest first-person shooting you’ll find on the console, as well as a storyline full of fascinating lore. While the oldest game in the series might be nearly 20 years old now, its exceptional game design continues to age wonderfully and this game feels as fresh as ever.

Whether you’re looking to race around tracks or explore Scotland at high speeds, Forza Horizon 4 has you covered. Its DLC even gives you the chance to race around in Lego models of famous cars. It walks the line of arcade racing perfectly, feeling suitably lighthearted at times, without being too silly too. Even greenhorn drivers will be wowed by this easy-going take on realistic racing.

On the Xbox Series X|S, players get a graphical boost and a half with a choice of a 4K/30 FPS mode or a 1080p/60 FPS mode. Other tweaks such as night shadows from car headlights and some improvements to loading times are welcome additions too. It makes the open-world environment shine on screen more so than before, and you’ll enjoy simply roaming the world before you. If you can’t get out and explore Britain for real right now, this is a wonderful alternative.

Deviating a little from the usual Call of Duty format, Call of Duty: Black Ops Cold War offers multiple endings and the chance to actually affect how the story plays out. Less on-rails than anything that’s come before in the veteran series, it’s an installment with a little more depth than the average CoD player will be used to.

Set during the early 1980s of the Cold War, there’s espionage and corruption at every turn, although for the most part, your mission is still to shoot anyone in your way.

On the Xbox Series X|S, there are graphical upgrades such as the ability to play at 4K with HDR, along with 120Hz support and ray-tracing too. It makes an already great-looking game look even better – although you may not have the time to notice this so much during multiplayer sessions.

Another title with 4K resolution support, HDR, and a FPS boost up to 120 FPS, Gears 5 is the pinnacle of the Gears of War series. With more of an open-ended story than before, it takes place after the events of Gears of War 4 following Kait Diaz as she discovers the origins of the Locust and her complex family history.

While previous Gears of War games were exceptionally linear, Gears 5 lets you explore huge landscapes and it’s all the stronger for it. With the graphical enhancements of the latest consoles, it’s a great showcase of draw distances and what can be accomplished with powerful hardware. All while being an exceptional third-person shooter. Expect to get messy.

Launched the same day as the Xbox Series X|S, Assassin’s Creed Valhalla was always going to be a terrific showcase of what could be accomplished with better hardware. Set during Viking times, it’s quite the departure from past Assassin’s Creed games – but it’s just as captivating as any Egyptian or Greek odyssey you may have been on previously.

With a seemingly never-ending world to explore and a similarly never-ending series of quests and activities to partake in, you’ll still find time to marvel at every blade of grass and gaze at the mountains in the distance. Even on the Xbox Series S, it manages a resolution of 1440p (although it’s a shame there’s no ray-tracing support).

Expect to lose hundreds of hours here if you plan on completing every mission, assassinating every target, establishing a strong settlement, and seeing everything on offer. It’s fair to say this is one of the best Xbox Series X|S games out there for those fervent achievement hunters and completionists.

The Gears series has always been about making fast-paced decisions and rapidly offing anything with more teeth or muscles than you without really engaging your brain. That was until Gears Tactics launched. Arriving the same day as the latest Xbox consoles, it’s a prequel to the first game and a remarkably different beast from the series you may be used to. Played from a top-down perspective, it owes more to the likes of XCOM than the rest of the Gears franchise.

It takes a little bit of time to get used to, but it’s a solid example of the turn-based strategy genre, and additions like the option to remix campaign missions after one playthrough certainly endear you towards returning. Visually, it looks great and is a prime example of what the hardware can do, boasting 4K and 1440p support, along with HDR reminding you that you’ve basically got a PC in console form sitting in your living room.

Ori and the Will of the Wisps

A change of pace from most games here, Ori and the Will of the Wisps is utterly gorgeous. That’s because it uses 4K to 6K supersampling on the Xbox Series X and manages up to 120 FPS on the beefed-up hardware, to boot. None of this would matter if it was a bad game, but it’s great – maybe one of the best Metroidvania titles of modern times. A 2D platform game with an emphasis on exploration and collecting items, it’s reminiscent of the Metroid series in that way which should appeal to veteran players and retro elitists alike. New abilities are unlocked at a steady pace, meaning there’s always a reason to come back for more, backtracking to earlier stages and seeing them from a different perspective.

There’s a pleasant story under the hood, too, with some typical indie quirkiness going on and some unexpected emotive gut-punches for good measure. Interesting level design, fantastic visuals, and an entertaining story. There’s not much more you could ask for, is there? This is one of the best Xbox Series X|S games right now – and we don’t think that’s liable to change any time soon, either.

Taking some time to find its sea legs, Sea of Thieves won’t appeal to those looking for a tightly woven narrative. But if you simply want to feel liberated and able to explore the ocean to your heart’s content, this will work brilliantly for you, you scurvy dog. Best played alongside a group of friends, players take the role of pirates and are tasked with completing voyages, forming alliances and trading partnerships, or simply floating around to do whatever takes their fancy. Just beware the kraken.

Sea of Thieves has always looked gorgeous, even on the Xbox One, but it looks even better on the Xbox Series X|S. You’ll soon find yourself constantly taking screenshots, simply to gawp open-mouthed at beautiful sunsets and watery vistas. The game’s quirky style feels suitably cartoonish – but never too stylised for its own good – and that means there’s plenty of charm in this pirate simulator, too.

Originally released in 2019, Devil May Cry 5: Special Edition is the souped-up version for the Xbox Series X|S, and remains one of the best-looking games on the format. With up to 4K resolution on Xbox Series X, the game still never manages to miss a beat achieving 60 FPS the whole time. Combined with its fast-paced combo-forming action – and its consistently foul mouth – it’s that kind of arcade-style gaming experience you could only dream of, once upon a time.

There’s a lot of depth to Devil May Cry 5: Special Edition’s combat and on higher difficulty levels, it can be tough, but it’s consistently rewarding too. Stylish action is everything here and once you get into the rhythm of things, you’ll feel suitably superior to mostly everyone. It’s simply a lot of fun to play and perfect, and you will simply never get tired of enemies bleeding out particle effects every time you slam your sword into them.

Control starts out a little slow, but if you love the often bizarre nature of Twin Peaks or The X-Files, it’s the perfect game to scratch that itch. Following the story of Jesse Faden as she explores a shadowy secret U.S. government agency and discovers some very sinister paranormal goings-on, it’s a third-person shooter that also has some puzzle elements woven into the experience, too.

Once the story gets under your skin, you’ll be hooked. But it also features a bevy of skills and abilities you can gain that make you feel like a superhero that will captivate you most. Certain elements of the game feel a little dated, but the sheer sense of power by the end means you’ll forgive it its flaws. And there’s this one setpiece right near the end that absolutely cements the game as one of the best Xbox Series X|S Games, too.

What other games should make the cut? Let us know what you think.

The post Best Xbox Series X|S games: The games to play in 2021 appeared first on Askhiphop.