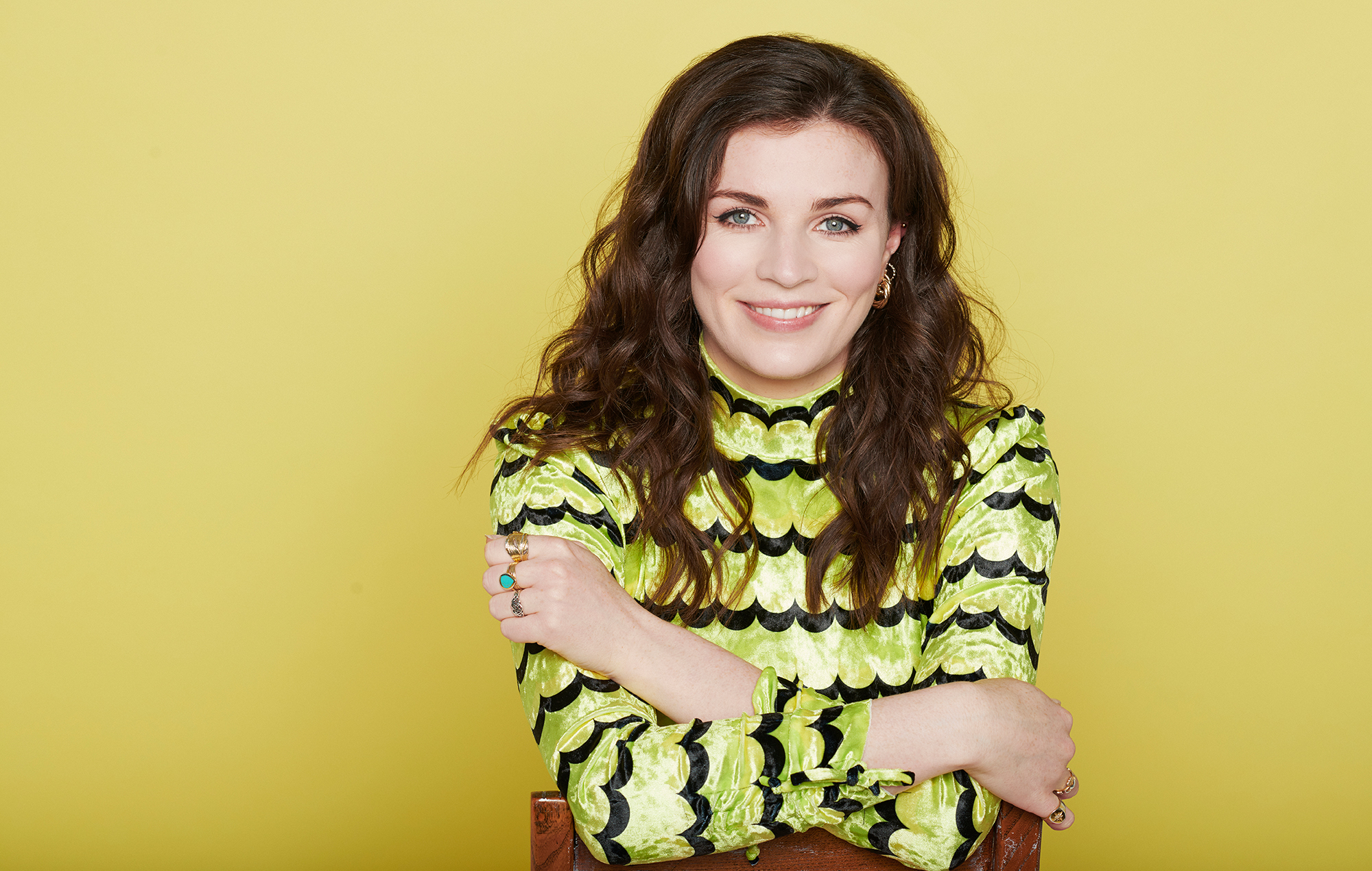 Being funny is a difficult job. Doing it in front of hundreds of people in the pissing rain is next to impossible. Yet as she shelters under a too-small umbrella while a minor storm batters London’s Regent’s Park, Aisling Bea is, somehow, still hilarious.

“We’re alive and we’re out!” announces the Irish comic to whoops and cheers – her post-pandemic audience not minding the rain one bit. Tightly wrapped in mackintoshes, ponchos and – for the ill-prepared – bin bags, they cackle heartily as she nails punchlines, shimmies to Tina Turner’s 1984 comeback hit ‘Private Dancer’ and lobs brollies into the crowd. Later, the show ends with a joyous singalong – Bea leading the soggy rabble as Ronan Keating’s ‘Life Is A Rollercoaster’ echoes around the make-shift amphitheatre. As a first step back to normality, things couldn’t have gone better.

“It just felt very freeing,” says Bea the next day, reflecting on the night during an honest and open call from her London home. “Maybe it’s the science of it being the opposite of lockdown, being in a group space talking at people.

“It’s also the opposite of making the TV show. You get to think of something and say it and there’s no judge and jury [to pass sentence]. With stand-up you just get to do the show.”

She’s talking, of course, about This Way Up, the razor-sharp comedy drama she writes and stars in which debuted on Channel 4 two years ago. Sometimes devastating, often hysterical, it follows Áine (Bea) – an Irish woman living in London who works as an English-as-a-foreign-language tutor. To everyone around her she seems friendly and engaging, but a recent nervous breakdown means Áine is struggling to put her life back together.

This Way Up’s first season earned rave reviews, and saw Bea pick up a BAFTA award. Juxtaposing savagely funny moments with gut-punch heartbreak, it details the gritty reality of recovery without getting bogged down in melancholy. By the time you read this, season two will have aired its first episode on telly, with the rest now available to stream on All 4.

“I would not recommend making a TV series during a pandemic,” says Bea, remembering the hellish journey she went through to get round two on screens. “It was really awful. If my friend was like, ‘Shall I make my art during an airborne virus after Christmas has been cancelled and the numbers are rising and people aren’t allowed to leave their houses?’ I would say, ‘No, don’t do that.’

“The consequences of anything happening to any of the crew or actors on set was huge. Every single day, you’re hyper aware that people are coming to work on your show during a pandemic – and if they have a terrible time or they don’t feel safe, that’s on you and your name is attached to it. It was crushing at times, to be honest.”

Despite the difficulties in production, these new episodes stack up well against the others. But while season one introduced us to Áine as she was leaving rehab – complaining to a staff member about the lack of a jacuzzi in the rehabilitation centre – season two has her feeling her way to happiness in a new relationship. Naturally, there are a few bumps in the road.

“Making ‘This Way Up’ knocked the shit out of me”

“One thing I wanted to do in series two is show that [recovery] isn’t linear – and that is most people’s experience,” says Bea. “The romcom ‘yays!’ and the balloons at the end aren’t truthful to me. I don’t know that experience.

“I wanted to reflect the reality of most people – someone who isn’t having a terrible life, loads of thing aren’t going wrong for them and [who looks like] they have everything together. They’re functioning but it’s tough to get through. That is what a lot of people felt like [in the] last year and it hasn’t been easy.”

As in the show’s first outing, Áine is again supported by elder sister Shona, who you’ll recognise as Catastrophe’s Sharon Horgan. Shona often has her own problems to deal with, but always makes time for a bit of sibling banter or to provide a shoulder for crying on when needed. Some of This Way Up’s funniest (and most moving) scenes involve the two on screen together.

“It was freezing cold in January…” begins Bea, kicking off a story about the day she and Horgan spent trying out a snazzy central London sauna (the type frequented by influencers). Except due to COVID-19, it wasn’t an actual sauna at a bougie spa, but a less glamorous, purpose-built one in the studio.

“I had a kidney infection and the only thing I said was, ‘Can we have a heater when we’re filming?’” she remembers. “They kept saying, ‘Yeah, yeah, stop going on about it!’ We ended up sat there in our bikinis, covered in glycerine to make us look sweaty – but it was freezing cold and we only had one heater between us for the whole, entire day!”

But you made memories?

Born in Kildare, 30 miles southwest of Dublin, Bea says she enjoyed making people laugh from a young age – even before her first stand-up gigs, which followed a stint at the prestigious London Academy of Music and Dramatic Art (LAMDA). “It’s like a drug. I’ll do it with the man who comes to the door, the waiter. I’m always looking around, it doesn’t matter who it is, looking for a score.”

Tragically, her father died by suicide when she was just three. And in 2017, Bea penned a deeply personal piece for The Guardian in which she discussed coming to terms with his death. She also revealed how her mother told her, ten years after the fact, that he’d taken his own life.

“The article I wrote about my dad’s death is one of the proudest things I’ve ever done,” she tells us today. “But when you do something like that, you have to be prepared for when people just come up to you and want to talk about their own experiences with suicide – or send you suicide notes or whatever it is.

Two years ago Bea took on an assistant, Claire, who’s since become one of her closest pals. One thing she helps with is Bea’s Instagram, checking her posts before she shares images. “[Sometimes] I’m about to post a picture of me on The Last Leg in a dress and suddenly three suicide messages will come in,” she says. “I’m so glad that happens and people feel like there’s an outlet to send it to. I definitely didn’t have anyone to look up to or hear those stories when I was growing up – and I desperately wanted to – but it can throw off your day, or sometimes your week.”

When you learn about the trauma Bea’s gone through in her own past, it’s hard not to draw parallels with Áine‘s story in This Way Up. Just how much of the show is based on her own experiences?

“I don’t tend to answer that question, the reason being as it is a work of fiction,” is her honest answer. She uses the analogy of a jumper: when people start asking which bits of the series are rooted in fact and which aren’t, it all begins to unravel. “People start pulling at a thread too much and are like, ‘It doesn’t look like a jumper anymore!’”

The other reason for this, is to protect her own boundaries: “I put my life up on stage a lot – and everything I say during stand-up routines tends to be the truth. [If you give too much away in interviews], you stop having any boundaries over which bits of your life you keep to yourself and your family, and which bits you don’t.”

As such, Bea has learned to put her story in her work, rather than in newspaper articles – “so it’s less about me”, she says. But Bea’s projects don’t always have to be semi-autobiographical – take 2019’s quirky Netflix sci-fi comedy Living With Yourself, in which she stars with Hollywood A-lister Paul Rudd.

The series was a smash – and saw Bea play Kate, the wife of Rudd’s character Miles who undergoes a new treatment to become a better person, only to find that he’s been replaced by a new and improved version of himself. Bea tells us she had a great time shooting it, but is unsure whether they’ll be bringing the show back for more.

“I am pretty sure we would have heard by now,” she says. “But I think we all went into it thinking it’d probably be like a long movie and who knows what would happen down the line… but I love Paul very much and I would work with him again in a heartbeat.”

Looking ahead, Bea is set to appear in Disney’s hotly-awaited reboot of the Home Alone franchise. “It’s a new Home Alone but it has all of the trimmings,” she says. “It was supposed to come out at Christmas but then everything got shut down.” Macaulay Culkin has been rumoured to reprise his role as trap-setting trickster Kevin McCallister from the first two films, but only as a cameo. Jojo Rabbit’s Archie Yates will instead play the lead, but Bea can’t reveal anything about the story. “I can’t! It’s Disney territory. So they’d probably put you in jail, and then me in jail, and then the mouse would come around…”

Next up is an appearance on Katherine Ryan’s upcoming Amazon show, and a movie she’s writing “with a lovely American guy which is in production now.” However, Bea stresses that she’s being very cautious not to take on anything too big too soon because creating This Way Up “knocked the shit out of” her.

As for season three, which is yet to be confirmed by Channel 4, fans shouldn’t expect anything for a while. “I haven’t had a day off yet!” says Bea. “I think that I am just coming out of the lockdown. On stage I feel so hopeful, which is a nice change…

“The day I won the BAFTA [for This Way Up in 2020], I got knocked off my bike. That night, I was in my garden with a sling and my flip flops. There was no award ceremony because of COVID and a bit of me felt cheated. But I ended up spending the night with my friends and I swear to God it was one of the best of my life. It was something I could hold on to, because all of the other stuff is fleeting.” That’s Aisling Bea for you – just happy to be alive and out with her pals.